Safety and Well-Being for Employees 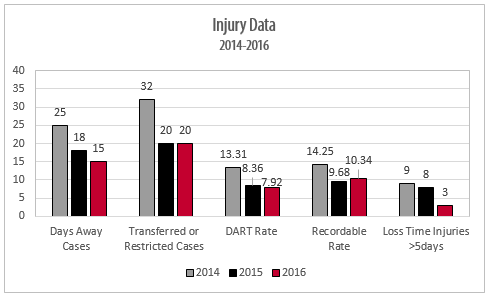 A package distribution company saw a company-wide need for an on-site prevention program to help decrease DART and recordable rates. In 2014, ATI Worksite Solutions (AWS) and another company were brought on-site for a one year pilot program. Having demonstrated exceptional service and providing quality preventative and proactive care to the employees, the AWS pilot program contract was extended.

AWS provided a resource for employees and management to help determine the seriousness of an injury and the proper course of action. AWS implemented a new hire program in which the Certified Early Intervention Specialist (CEIS) met with new hires at least 3x per week to practice stretching and go over specific safety topics. A new pre-shift dynamic stretching routine was also implemented to help reduce the risk of injury while on the job.

The success achieved at the hub paved the way for AWS to expand to six other hubs, and possibly other subsidiaries.

Prior to AWS coming on-site, the hub’s DART and recordable rates were some of the highest in the company. In 2015, the main objective was to decrease the DART rate and in 2016, the focus was to decrease loss time greater than 5 days.

With a focus on early reporting and using basic first aid to treat injuries, rather than the employees seeking outside care, the site’s metrics have improved over the past two years. Because of the significantly low DART rate that “blew everyone else out of the water,” the hub won the Fiscal Year 2016 Safety Award for the Eastern Region. Since coming on-site, every metric has decreased.