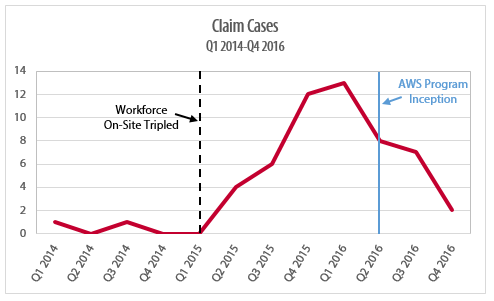 The power tools and fastening company has been in their building for the past five years; until just over a year ago the facility was solely fastening. In 2015 the power tools employees started working in the same building. Since then, the total number of employees on-site has nearly tripled.

Since the beginning of 2016, claims per quarter have dropped from 13 claims in Q1 to 7 claims in Q3. This decline was seen with only one full quarter of AWS being on-site. Claims continued to decrease during June 2016 to November 2016, even when the number of employees on-site doubled.